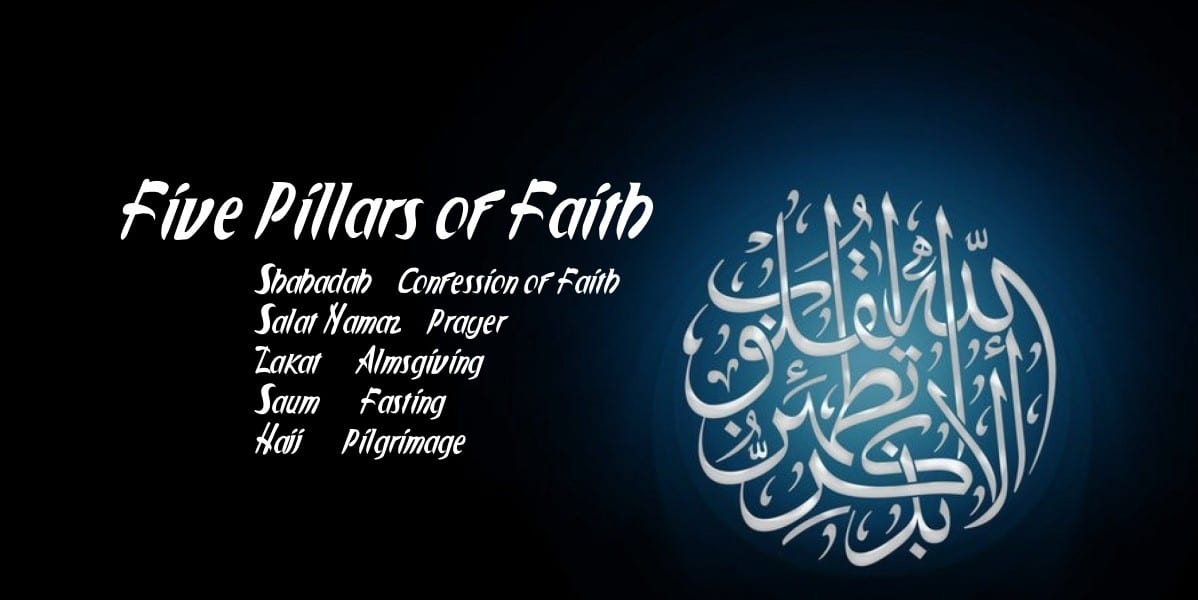 There are Five Pillars of Faith in Islam there are as follows:

The word shahadah means to bear witness, attest or certify to something or an event. So when Muslims speak of the Shahadah they are referring to the words with which they testify to their faith in Islam: ‘Ashahadah la ilaha illa Allah: Muhammad Rasul Allah’ (‘I bear witness that there  is no God but Allah, and that Muhammad is the Messenger of Allah’).

The words within the Shahadah that are translated as ‘there is no God but Allah, and Muhammad is the Messenger of Allah’ are known as the Kalima, and can be described as the Muslim creed.

Salat, or prayer, is obligatory for everyone over the age of twelve and of sound mind. Initially Muhammad(PBUH) and his early followers prayed twice each day, in the morning and evening (11.114). Later on in Medina, they began to pray three times each day (2.238). This change was possibly influenced by the Jews, who prayed three times a day. Eventually Muslims adopted five daily times of prayer, each announced by a muezzin who issues the adhan or ‘call to prayer’. Before praying, Muslims must ritually cleanse themselves.

Wudu or wuzu is the normal ablution. It involves washing certain parts of the body including the mouth, nostrils, ears, private parts, arms and feet.

Ghusul, a more thorough washing, involves a complete bath and is performed after such things as sexual intercourse or after touching a corpse. If there is no water to wash in, fine sand (tayammum) can be used for cleansing.

The qibla is the name for the orientation that Muslims must adopt when praying. At one time, Muslims faced Jerusalem, but later it was ruled that they must face Mecca and the Ka‘bah. There is no truth in the allegation that Muslims pray towards the sun and therefore worship the sun-god.

Prayer can be performed individually, but it is preferable to pray in a group led by a prayer leader (imam). The prayers involve adopting prescribed postures and reciting key Quranic verses in Arabic.

Besides these formal prayers (salat), there are other non-liturgical prayers such as du’a (a prayer of supplication or invocation), istighf’r (a prayer of pardon or forgiveness); and tasb (a prayer of praise or glorification). These prayers, which are mainly invocations, do not have to be said in Arabic but can be offered in any language. Among Five Pillars of Faith this is secound most important.

The Qur’¯an calls on Muslims to give zakat, as well as to pray (e.g. 2:43, 271–273). The word zakat means ‘to purify’, and one purifies one’s wealth by giving some percentage of it to the poor and needy. The exact percentage(40%) differs depending on the type of possessions one owns. In practice, individuals usually decide on the amount of zakat they will give. However, in Libya and Saudi Arabia, zakat is a thrid important among Five Pillars of Faith and it is a part of government taxes.

Muhammad taught his followers to give zakat while he was in Mecca and made it compulsory after the move to Medina. He also made it clear that it was not to be given to his own family, for he was already entitled to a special share of all the booty captured. Rather, zakat is intended to benefit poor Muslims. It may not be given to close relatives, nor to non-Muslims. Thus Muslim non-governmental organisations (NGOs) who get funding from zakat sources are under pressure not to allow non-Muslims to benefit from their services.

In addition to zakat, Muslims can also pay sadaqa, a free-will offering given to help the poor. An example of sadaqa is fitrah, which is given at the end of Ramadan (2:276).

The tradition of fasting among Muslims began with Muhammad, who fasted when contemplating in the cave. Initially, he observed Jewish traditional fasts, including the Day of Atonement, and the fasts lasted a full twenty-four hours. However, as his followers became involved in more battles, such long fasts were seen to cause problems. After the Battle of Badr in 624, it was realised that fasting Muslims were too weak to fight their enemies. So the pattern of fasting was changed, and a directive was issued for Muslims to fast from dawn to sunset for thirty days during the month of Ramadan.

This month was chosen because legend has it that Laylat al Qadr, the Night of Power when the Quran was revealed to Muhammad, was ten days before the end of Ramadan. In honour of this event, the whole Qur’¯an should be read during this month. The month is so holy that it is believed that during it the gates of heaven stand open, while those of hell are shut and the devils are chained.

The duty to fast is mentioned in Sura 2:183–87, which prescribes total abstinence from food, drink and conjugal relations during daylight hours in the month of Ramadan. Muslims are also prohibited from taking any medicine or applying any ointment to a wound on the head or to any ear or nose infection.

Fasting, like prayer, is compulsory for all over the age of twelve, although those who are travelling, pregnant women, nursing mothers, the sick and the elderly are exempted. They must, however, make up for their failure to fast by fasting at a later date or by giving some offering to the poor.

The end of Ramadan is marked by two days of celebration (known as id ul-fitr) and Muslims gather together in the open to say special prayers. This is fourth among Five Pillars of Faith.

Sura 3:96 specifies that every adult Muslim who is free and physically, mentally and materially able must undertake a pilgrimage to Mecca at least once in his or her lifetime. While most of the rituals surrounding this pilgrimage are rooted in pre-Islamic Arab religion, Islam has invested them with new meanings. The rituals of the pilgrimage all commemorate Abraham’s family, and especially the ordeal of Hagar and Ishmael, the great ancestor of all Arabs.

Muslims talk about a great pilgrimage, the Hajj, and a lesser pilgrimage, the Umra. While the Umra can be performed at any time, the Hajj can only be completed during the month of Dhu l-Hajj, which is the twelfth and last month in the Islamic calendar.

Before entering the haram (the sacred area of Mecca), male pilgrims put on special garments known as the ihram, which are made of two white sheets. Women put on simple ordinary clothes. From that point on they abstain from shaving or cutting their nails, and from kissing and sex.

They go to the Great Mosque of the Ka‘bah, which Muslims believe was built by Abraham as the first place of worship. Here they perform the tawaf by circling the Ka‘bah anticlockwise seven times and touching or kissing it.

After the tawaf the pilgrims go and drink from Zamzam, which is believed to be the spring where Hagar and Ishmael found water. Then they perform the sa’y, running or walking briskly seven times between the hills of Safa and Marwa to commemorate Hagar and Ishmael’s frantic search for water in the desert after they were driven out of Abraham’s home.

The pilgrims then leave Mecca and spend the night in the village of Mina before travelling on to the Plain of Arafat, fifteen kilometres from Mina. There they perform the wuquf, which is considered the highpoint of the hajj as they stand and pray for forgiveness of sins.

On their way back to Mina, the pilgrims stop at Muzdalifa, about halfway to Mina, where they spend the night. Each person gathers either forty-nine or seventy pebbles to throw at three stone pillars (al- jamarat) in a symbolic attack on Satan. As they approach Mina, each person throws seven pebbles against the first pillar. After this, each person offers a blood sacrifice, either a cow, sheep or camel, and shares with all Muslims worldwide in the festival known as the Feast of Sacrifice (id ul-adha).

This feast commemorates the time when Abraham offered a ram in sacrifice rather than his son Ishmael (although in Genesis the son is said to be Isaac). Men then shave their heads, take off the ihram and put on normal clothes, and women cut off a lock of their hair. They all return to Mecca and again circle the Ka‘bah seven times. The next three days are spent at Mina, where they continue to pray and throw the rest of the stones at the three pillars, seven at each pillar per day. In all, the period of the hajj lasts from the 8th to the 13th day of Dhu l-Hajj. Before leaving, many pilgrims also go to Medina to visit Muhammad’s tomb and offer prayers in the Prophet’s Mosque (Al-Masjid al-Nabawi).

African pilgrims to Mecca are now often sponsored by their governments. This policy was begun by the colonial powers in an attempt to appease Muslims, but today most African governments, including those of countries where Muslims are a very tiny minority, use taxpayers’ monies to help Muslims carry out a purely religious duty. The reason may be simple political opportunism on the part of politicians, or they may be responding to pressure from Muslim communities.

Many non-Muslims are very unhappy about this sponsorship and it has led to tension, especially in Nigeria. But Muslims should also be concerned. Government sponsorship of pilgrimage opens the door to political interference in and manipulation of a religious duty, and may also undermine the spiritual significance of the act. Going on a pilgrimage was meant to involve personal sacrifice on the part of the pilgrim. This is fifth among Five Pillars of Faith.